Are you still looking for a fun costume to wear as a couple during Halloween? I rounded up some of the cutest Halloween costumes for couples: sexy costumes, funny costumes, and the cutest costumes for Disney fans or fun series or movies on Netflix or Amazon Prime.

I’ve also added a bunch of costumes that you can just easily buy online. These costumes are really great to wear as a couple on Halloween, but can also be re-used for Carnival, if you want! 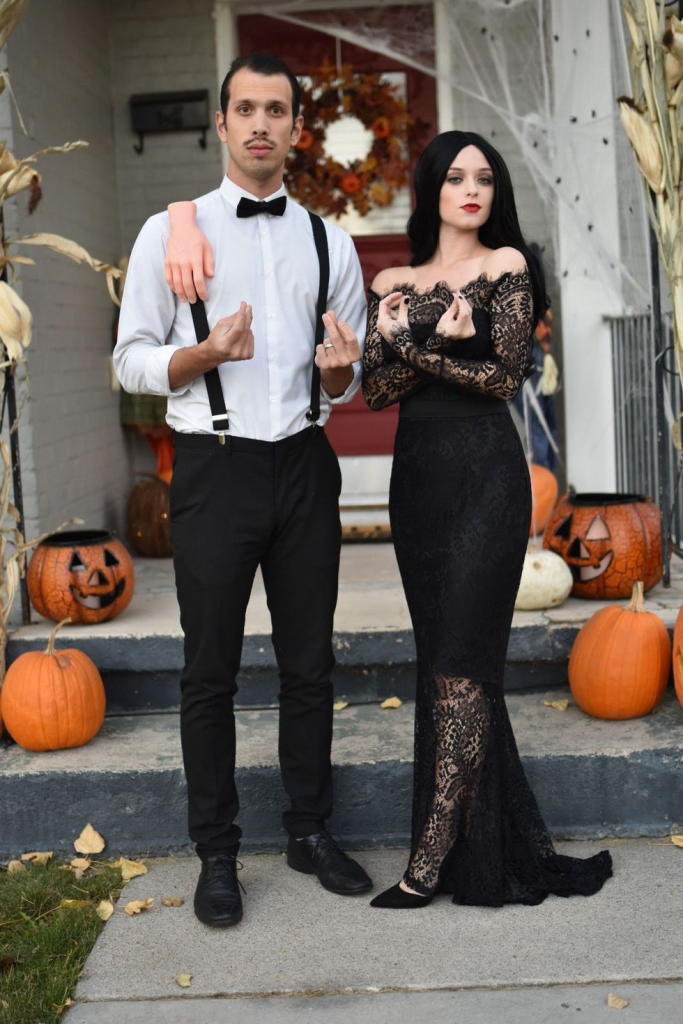 Halloween costumes for couples (to buy)

Don’t feel like making your own Halloween costume? These are some super cute costumes I found on Etsy, which you can easily buy. Of course, you have to order them in time!

This is such a cute couple’s costume for any sushi lovers out there! These sweaters are perfect if you’re a couple who doesn’t really want to dress up in a costume but still would like to participate in Halloween festivities. Nice and warm, so perfect for a colder fall evening! Pirates of the Caribbean

Ah, such a cool costume for couples! Reenact Pirates of the Caribbean together with this amazing couple’s costume. Horror… low battery and no wifi

The ultimate horror costume for us modern folks! No wifi and low battery… argh! Oh come on… who can resist these puns? I love them! Peter peter and the pumpkin Karen and the manager

Hehehe, this picture made me laugh a lot. You also have some variations of this theme on Etsy, so be sure to take a look there. Dreaming of a more simple life? Then this Couple’s Halloween costume might just be right for you: go as an Amish couple. Some Halloweens, you just want to dress casually and comfy. This is the outfit for you! Prefer not to put on a full costume for a Halloween party? Then these fun glow-in-the-dark t-shirts are a great option. Are you guys a ride-or-die-couple? If yes, this is THE best couple’s costume to wear this Halloween: Bonnie and Clyde! Okay, these are so, so cute! Bacon and eggs t-shirts for couples Super comfy and very cute: for the dadster and momster-couple! I don’t know about you, but this is my favorite breakfast. Might try and convince my boyfriend to wear this, this Halloween! Feel like dressing up as a sexy doctor and nurse? These fun costumes are perfect for you guys!

Cute couples costume: Little Red Riding Hood and the lumberjack! Isn’t this an über cute costume to go to a Halloween party together?

Seriously… this is waaay to cute!

Get your Homer and Marge on, people!

This Harry Potter costume is so much fun! Avada Keda… no, wait!

The Office: Pam and Jim

Okay, how cute is this costume? I really love The Office, this costume is something my boyfriend and I would wear if we went to a Halloween party. The cutest couple from The Office, check!

Orange is the New Black

Another hit show that is definitely not to be missed at your Halloween party: Orange is the New Black! Also ideal if you need a last-minute Halloween costume.

Of course, Grease can’t be missing from this list of delightful couples costumes!

This is another fun Halloween costume that you can easily wear if you don’t have much time left to pick out your costume. You will especially need to spend some time on your hairstyle 😉

Yes, of course, Dirty Dancing has to be on this list after all! It’s one of my favorite movies and not only mine!

Dress up as Baby and Johnny and have the time of your life! Like the outfit from Grease, you will have to put a lot more time into your hairstyle than your outfit.

There have been so many iconic moments during Friends, that it’s hard to choose which one to go to a Halloween party together.

The pre-eminent moment you can use? The moment Ross and Rachel get married drunk!

One of the most entertaining series ever (we’re currently rewatching it): Hell’s Kitchen!

Gordon Ramsay has given veeeeery many onliners there, but one of his best is really the ‘idiot sandwich’.

This couple’s costume is really hilarious!

Now if there’s one series that really shouldn’t be missing from this list, it’s definitely Stranger Things! Since the newest seasons only came out recently, you’ll see these costumes everywhere this year!

Are you a fan of Bob’s burgers? Then this costume is perfect!

I already showed that the scene of Ross and Rachel getting married drunk in Friends is often used as a costume, but you can also choose to go as “regular” Ross and Rachel!

PS: the little monkey to bring to your Halloween party as Marcel, completes it!

One of my favorite animated couples: Shrek and Fiona!

Okay, okay, this costume is really going to get you comments (So yes, there really was room to leave Jack on that door with you, Rose! And yes, you’re 25 or older LOL) but oh, what a delightful costume this is!

Finish it off with a sketchbook for Jack!

Are you both Star Wars fans? Then you must have dressed up together as characters from the franchise at least once!

One for the millennials among us: Blue’s Clues! Dress up as Blue and Steve and bet the whole evening is about you guys?

Ah, Game of Thrones can’t be forgotten. Or what about the prequel, House of the Dragon?

Back to the Future

Are you still looking for a sexy costume for Halloween? How about this Mr. and Mrs. Smith costume? Delightful, right?

Oh, this is one of those costumes that I would love to wear myself one day with my boyfriend!

I’m an incredibly big fan of the Addams Family myself and isn’t the love affair between Morticia and her husband Gomez the best relationship ever?

Complete your look with a little Cousin Itt or Hand!

There’s a new release of Wednesday on Netflix, so you can use that as your inspiration as well.

Mary Poppins and the Chimney Sweep

The young couple from  ‘Up’

Surely my all-time favorite movie has to be ‘UP’!

I find myself bawling like a little kid every time in the first few minutes, but just because of that, this is really such a cute costume as a couple!

Beauty and the beast

Red Riding Hood and the wolf

The older couple from ‘Up’

How I met your mother

The Joker and Harley Quinn

Saved by the Bell

Bob Ross and a painting

Ok, how genius is this?

Batman and Batgirl or Catwoman

Steve Irwin and an alligator

Whatever you do, don’t go as Steve Irwin and a stingray!

s’Mores and a campfire

KFC: the Colonel and a chicken

Cleopatra and a pharaoh

The Statue of Liberty and a tourist

Hugh Hefner and a Bunny

I think this costume is really hilarious! Swith the roles!

Hugh Hefner and a Bunny (part 2)

What do you think of these costumes? There are definitely some great costumes in here that you can use when you go to a fun Halloween party as a couple! Have fun!