Ah, Bridgerton! Today marks the release of the new season of this delightful swoon series on Netflix, time to take a look at the hairstyles and makeup from this series, right?

We take a look at the different styles and implications behind these iconic hairstyles and makeup styles. From traditional to modern, we reveal the secret behind why these hairstyles are so popular and what they mean in the Bridgerton series on Netflix.

Because yup, there’s often an extra meaning behind that! You won’t discover the hair trends 2022, but you will discover gorgeous hairstyles and makeup looks to try out.

Are the hairstyles historically accurate?

No, the Regency hairstyles have been given a much more modern twist, this is not an accurate representation of those hairstyles at the time. Which of course is not to say that they are beautiful hairstyles.

During the first season the hairstyles and makeup were by the hand of Marc Pilcher, who unfortunately passed away in October 2021 from Covid-19, but after the first episode you will see an in memoriam for the stylist.

In the second season, the hairstyles and makeup are done by Erika Okvist.

Okay, before we go on about the hairstyles, I want to take a moment to show you this clip. Joe Jonas as one of the Bridgertons, LOL!

The lovely Jacky Wyers (you can see her wonderful video tutorial below) wears a beautiful Bridgerton hairstyle here: 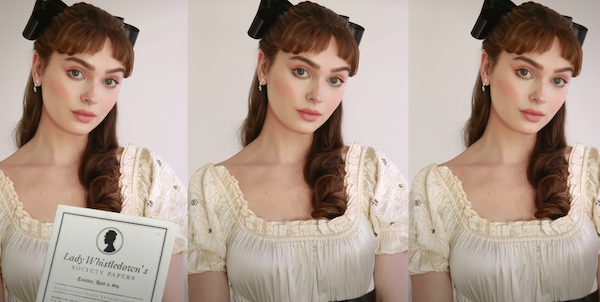 Daphne is the debutante of the season and her hair should reflect that. Her hairstyle leaves her neck exposed (during the Regency era, this was an expression of elegance) and allows the family jewels to take center stage.

Her bangs are curled and often lie flat against her forehead: very trendy.

At home, Daphne usually wears her hair down in a half updo style, and curled in a ponytail. Her bangs are straight, but in a middle parting. Sometimes her bangs are curled out a bit.

Eloise is not yet a debutante: this is very evident in her hairstyles and outfits that are more comfortable and childlike. In the second season of Bridgerton, we see a shift with Eloise because she is now a debutante and is introduced to the ton.

By the way, I am a heavy fan of Eloise Bridgerton: a feminist with a lot of sassy statements, lol!

Ah, miss Penelope. I won’t give anything away, but Penelope plays an important role. With her gorgeous red hair color and beautiful curls, she is always dressed in beautiful dresses in a nice warm color that make her shine. Her locks are often beautifully done up or half done up.

A royal haircut is what you see at Queen Charlotte in Bridgerton. Her hairstyles are way over-the-top but oh-so-beautiful! These hairstyles are not just easy to recreate, you have just like the queen a whole court for it!

The Duke of Hastings Simon

Alas, alas, heartthrob Régé-Jean is no longer in the cast this season, nor will we see him again. His wife Daphné, on the other hand, we do see in the very first episode.

The diamond of this new season: Edwina Sharma.

The reverse puff or bun

In the early days of the Bridgerton family, women wore their hair in an elegant bun. This style was formal and severe and not suitable for everyday wear. As the family grew, they needed a more practical hairstyle that they could afford to put up a lot. The inverted puff was born out of this desire to create a modern look that could be worn all day long.

The style is famous for its versatility. It is a simple cut that can be styled in many different ways, perfect for casual occasions and formal occasions. It also works well with curly or wavy hair, making it a great hairstyle for anyone who wants to add some height to their look without losing any femininity or delicate features of their face or body.

One of the most striking hairstyles, are the half-done and fully-done hairstyles with a tiara: during the balls we see these hairstyles in abundance!

It is therefore an ideal accessory to give your hairstyle a royal touch!

Flowers in the hair

During the horse races, almost all women wear flowers in their hair. Not always are these real flowers, but often they are fabric flowers.

The classic hairstyles in Bridgerton

The classic Bridgerton hairstyle is a layered hairstyle, with long bangs running down the back of the head.

Both men and women often wear this hairstyle. It was popularized by Lady Diana Spencer in the 1980s and is still in fashion today. Since the Victorian era, the classic Bridgerton hairstyle has existed with some variations over time.

It is crucial to note that this style has no hidden meaning behind it but has become an iconic part of the social life of Bridgertons, especially in their youth.

The modern Bridgerton hairstyle is similar to the standard version above, except that it is shorter and more contemporary.

If you’re looking for a modern approach to this style, try side-parted bangs or undercut bangs (think your hair is shaved short on one side).

Both men and women can put on this style. It was made popular by Harry Styles in the 2010s, and many celebrities followed suit. The style is also trendy among men from Bridgerton.

Vintage Bridgerton hairstyles are similar to the modern version, except that they have longer bangs than those above.

They were popular in the 1940s, especially for older Bridgerton men who wanted to look dapper during this period of history. Both men and women often wear this style as part of their daily lives.

It is important to note that this style has no hidden meaning behind it, but has become an iconic part of the social life of Bridgertons, especially in their youth.

Bridgerton makeup styles can be quite complex. The primary color in Bridgeton’s makeup is pink and is usually used to create an elegant, yet natural look.

The makeup used in Bridgerton season 2 is from the brand Pat McGrath. As such, she has released some exclusive makeup sets that you can buy! 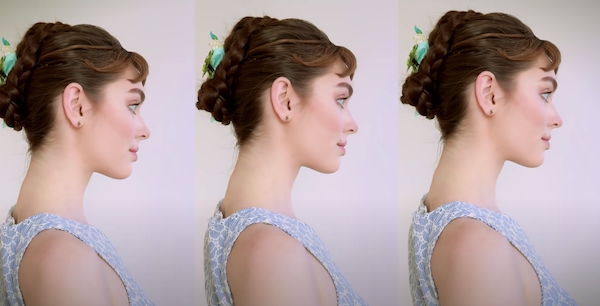 This color is often contrasted with a pale lip color and eye makeup. In Bridgerton they also often use eyeliner and mascara, both very popular among the Bridgerton community. Some commonly used products on set:

The Bridgertons are known for their progressive and innovative looks. They have a strong sense of style and pride themselves on their individuality, making it easy to experiment with new trends without looking out of place.

They are also known for a strong sense of self-expression and style.
The Bridgertons’ fashion sense is very diverse and complex because it is constantly evolving. As the years go by, the style in Bridgerton also changes.

They often look to Parisian fashion for inspiration, and to the traditional dress of their ancestors.

When they dress formally, they usually wear a bow tie or tie with a black tie. For informal occasions, such as dinner or the theater, they often wear a suit or tuxedo to create an elegant appearance.

Bridgerton men are known to often wear bow ties in their daily lives. It symbolizes class and sophistication: two things that Bridgerton men highly value in themselves and others. Bow ties can be worn with almost any outfit, whether formal or casual: even when running around after important business meetings.

What do the hairstyles mean?

Wearing a hat, or even a simple headband, is a sign of respect. It shows that the wearer takes his job seriously and that he is not to be trifled with. If a woman goes home wearing a hat or a headband without having completed her task, her family will know that she has been taken advantage of and she will soon be completely ashamed of her behavior.

The next hairstyle is the bun. A bun is worn as an accessory to many different outfits: at home, at school, or at work. It can also be used as an accessory at formal events such as weddings and funerals.

Some people believe that wearing buns shows off their intelligence and strong personality.

The third hairstyle is the ponytail. Both men and women wear this hairstyle, but it is more commonly worn by men.

Many men wear their hair in this style because it shows off their personality, and they believe it makes them look more masculine and attractive. Women do not wear this hairstyle as often as men, but they can be seen wearing the ponytail when they attend a job interview or take on a major responsibility at work.

The fourth hairstyle is the bunnet. A bunnet is a small, round hat that women wear for special occasions such as; weddings or funerals. It may have to do with religion or culture, but there does not seem to be one particular reason to wear one for a specific occasion.

The fifth hairstyle that women wear is the power bun. This hairstyle is worn by women who want to show their intelligence and strong personality.

The power bun consists of a large hat that covers the entire face, including the eyes, but does not cover the hair on the head. It is worn by many business and professional women who want to look intelligent at work, but who still want to look attractive while at work.